DOCG and the quality pyramid

Conegliano Valdobbiadene DOCG Prosecco Superiore is produced within the 15 municipalities set out in the Disciplinary Code selected based on their tradition for quality production. The addition of the term Rive (which literally means “steep slope”) was created to underline that the grapes are harvested in a highly select area and the exact location of the vineyard must be given on the label (in total there are 43 areas, 12 municipalities and 31 hamlets).

at least 85% Glera with the remaining 15% made up of other authorised varieties: Perera, Bianchetta, Verdiso etc.

this may only be performed in the province of Treviso

this may only be performed in the province of Treviso 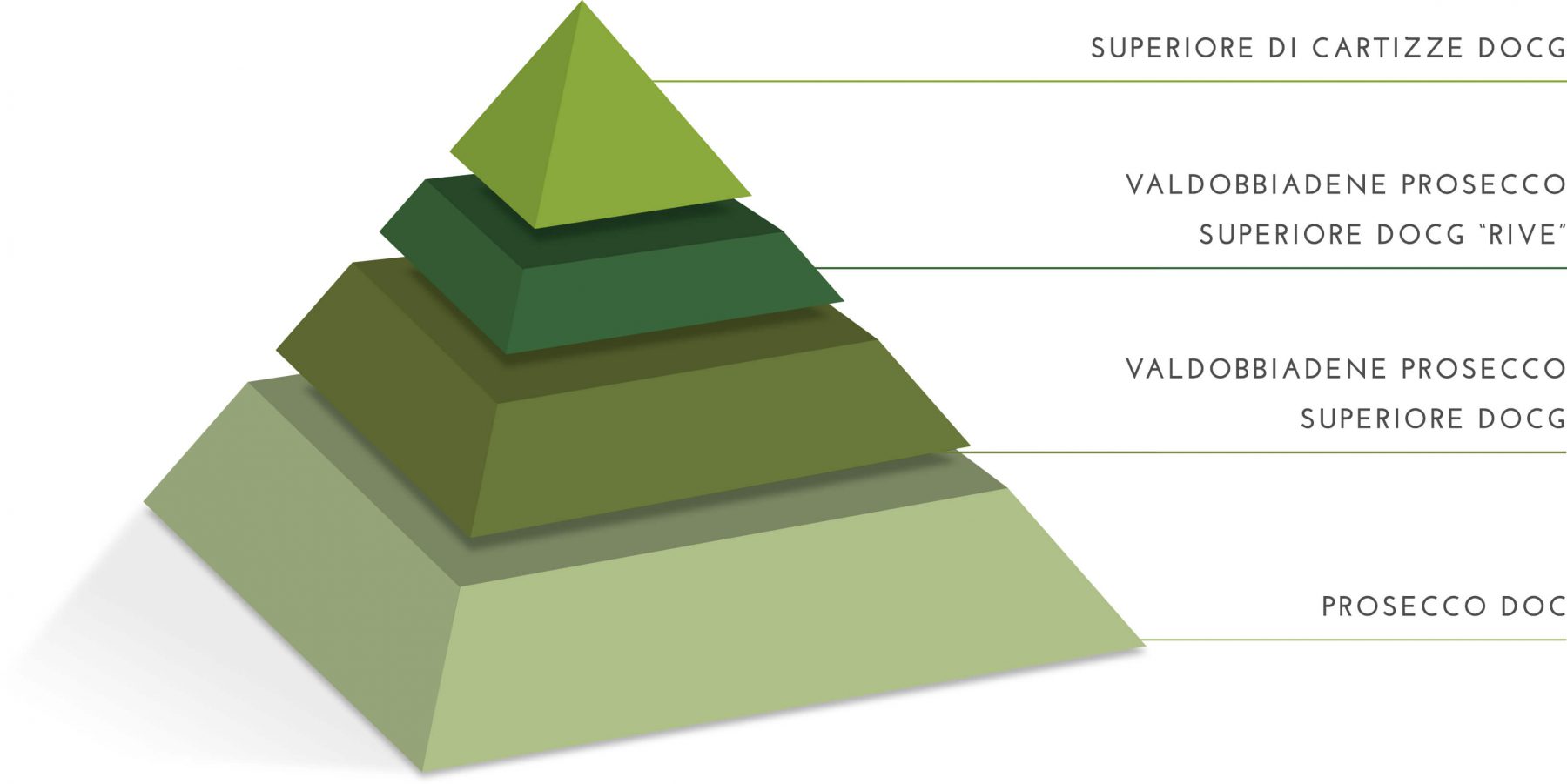 This is the method for producing sparkling wine that involves a second fermentation of the wine in autoclaves, large pressurized containers often made of steel. Within the method there are some significant variations possible, above all with the amount of time the wine is left to rest on the lees. A carefully designed longer resting period allows for some Charmat Method wines to achieve levels of complexity and intensity of flavour that owe nothing to many wines made using the Classic or Champagne Method.

Both in Italy and abroad the majority of sparkling wine is made using the Charmat – Martinotti method, but the two names are part of a long-running dispute. Although it was and still is known mainly as the “Charmat Method”, the original idea of carrying out the sparkling winemaking process in a large watertight container, similar to an autoclave, was proposed back in 1895 by Federico Martinotti, then director of the experimental institute for the Oenology of Asti. The idea proved successful, but it was a French engineer, Eugène Charmat, who in around 1910 built and patented the autoclaves that made possible the practical development of the process originally devised by Martinotti; the success of his equipment was such that the method adopted his name. From this began the long dispute and the sharing of the name and authorship of this process for producing sparkling wine. The Charmat – Martinotti method is also known as the Italian method due to the worldwide fame of Prosecco, Asti, and Lambrusco.

A new production which has met with instant success. Sugar residue from 0 to 6 gr/l. Fruity notes of pear, apple and citrus with a delicate overtone of acacia flower. Ideal as an aperitif, perfect with raw fish and seafood dishes.

This is the most international version. The sugar residue is 8-12 gr/l and the wine presents with floral aromas with notes of bread crust highlighted by a well-defined sapidity and acidity. This is a wine which is always well-received at the table.

With a sugar residue of 14-18 gr/l this is the “classic” Prosecco. It has a fresh bouquet rich in fruity aromas of apples, pear and a hint of citrus fading into a florid finish. This wine is perfect as an aperitif for all occasions.

The higher sugar residue, from 22-24 gr/l, highlights its softness and its clear aromas of ripe fruit. This is an elegant and contemporary wine excellent between meals and perfect with dry pastries and fruit tarts.